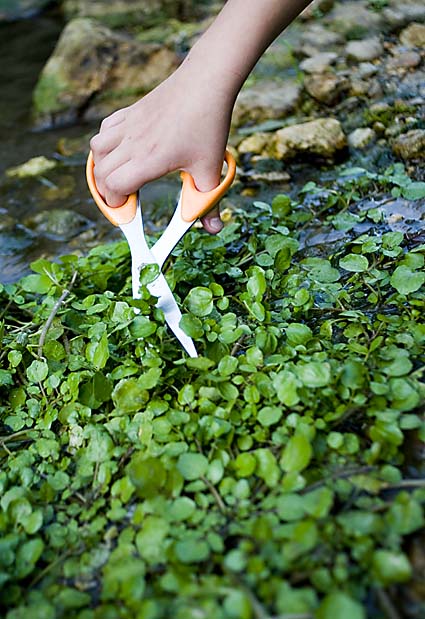 I picked the world’s freshest watercress from a chilly Minnesota river last week, and baked it into fantastic savory flatbread, all out in the wild (everything tastes better outdoors).  This camping-trip method blends two favorite techniques from our book:  rolling in something that wasn’t originally mixed in the dough, like our raisin challah on page 183, and baking in a skillet on the stovetop (like our naan on page 173).

Family camping trips are a great time to make sure we all stay connected with each other.  There are no distractions (from each other!) so this is nothing like the “real” life of work, running a household, and schoolwork.  My family is addicted to it and though we only go once a year, none of us can imagine doing without it.  We camp in the blufflands of Southern Minnesota, a unique and beautiful part of the state.  It’s actually quite a rolling terrain, not like the flat prairie that most people associate with the Upper Midwest.  This year, we camped 30 steps from an chilly stream, and it was teeming with wild watercress, growing all along the shallows at the stream’s edge.  Bingo!

After the park ranger assured me that yes, it was edible watercress, and that it was legal to pick, I started to think about using it in bread.  Watercress has a sharp, peppery, flavor that goes well in all kinds of salads and savory dishes.  I love it, but it’s often very difficult to find in supermarkets.  So this was really a gold mine.  If you can’t find watercress, this recipe would work with any kind of savory green.  Arugula comes to mind if I were to buy something for this from the supermarket.

We were a bit squeamish about eating the greens raw in salad (the river water isn’t considered drinkable), but sauteed watercress, when nicely salted and garlicked up, makes a fantastic savory addition to bread, along the lines of our Spinach Feta Bread (page 110 in the book).  After I got some help harvesting a bunch with a kitchen shears (above), I cut away the tough stems and roughly chopped the cress with an Opinel folding picnic knife (everyone who goes to France seems to buy for one of these for rustic picnics, but I have to admit that my wife got our Opinel from Amazon).  It’s an old-fashioned knife, made of a relatively soft carbon steel that is very easy to sharpen, so this thing is always razor-sharp for camping trips: 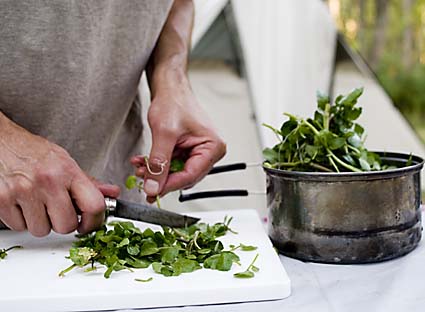 Then fire up a Coleman camping stove , liquid-fueled or propane (or whatever brand you like, so long as it provides a strong heat source that’s comparable to your home stove).  Saute a clove or two of chopped garlic in about a tablespoon of olive oil until fragrant and just beginning to turn color.  Add a big bunch of chopped watercress and saute over medium-high heat until wilted.  Salt to taste and remove from heat.  I like a cast-iron skillet for this job. 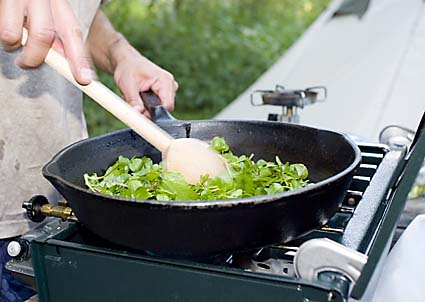 Now, cut off a chunk of pre-mixed stored dough–enough to cover the bottom of your skillet when you roll it out to 1/8 to 1/4-inch thickness (it may take some trial and error, but it’s usually about the size of a peach for a pan this size).  On the camping trip, we store basic dough from the Master Recipe in a cooler packed with ice that we stow in the car at night (OK, we had a lapse and left it out in the open for “a while” and a racoon stole our organic watermelon out of it.  Could have happened to anyone.  We’ve been camping for years and never did this.  Some subtle recipe advice:  DON’T LEAVE YOUR COOLER OUTSIDE UNATTENDED IN THE WOODS!

Anyway, roll, stretch, or flatten the dough into a round; for this trip I just brought along a silicon mat and used that as my work surface with a little flour and my hands.  No rolling pin on this trip.  Which would have come in handy when I tried to intimidate the racoon using nothing but a flashlight. Once the dough is flat and round, scatter the surface with your sauteed watercress: 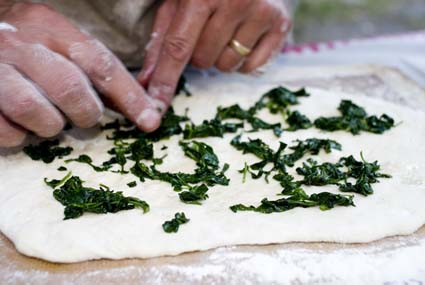 Then roll up the whole thing into a cylinder like so: 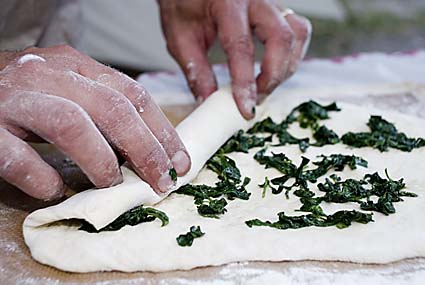 I love this method, because it allows you to use a very basic dough and add in something that radically changes the nature of the bread, just for this one loaf (you can go back to plain bread next time).  This technique works well with greens, nuts, raisins, or just about anything.  Chocolate, for example.  But I digress.

Form the rolled-up cylinder into a ball by tucking the ends underneath, shape the ball briefly and then flatten it again with your hands and/or a rolling pin to form a flat round: 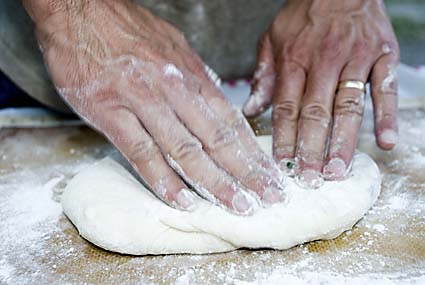 Pre-heat your skillet over medium-high heat with about a tablespoon of oil, add your dough round and then lower the heat to medium-low and cover closely to trap steam.  The heat setting you want will take some trial and error; if it’s too high the bottom will burn before the flatbread is set, if it’s too low it takes forever and you get an unappetizing pale result. 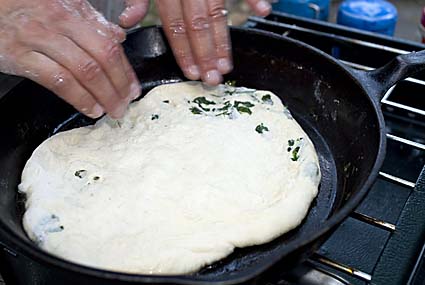 If you’ve set the heat right and keep the lid on the skillet, you should get good caramelization like this with about five minutes on a side (flip the flatbread using a spatula when the underside is browned to your liking), but this all depends on the thickness of the dough and the power of your camping stove: 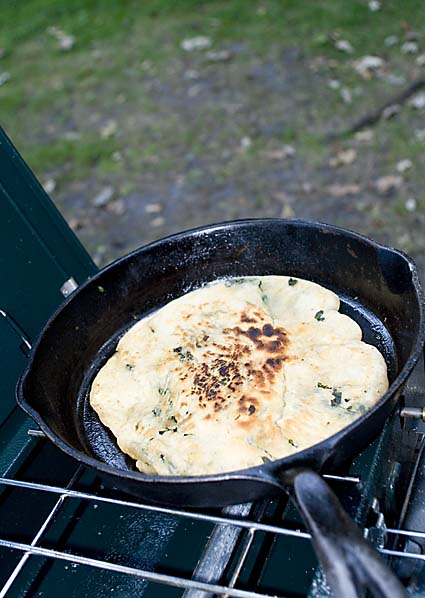 We devoured this thing after cutting it up with the kitchen shears– we used the pieces as improvised hamburger buns.  They split well, even though this method doesn’t encourage puffing.

Camping season is rapidly drawing to a close here in the great North– wherever you are, your season is probably longer than ours, so enjoy, and consider having fresh bread every night in your campsite with your family.  And of course, if you’re not a camper, you can do this on your kitchen range.  If you like that sort of thing.