If you’ve been to Cafe Du Monde in New Orleans, you’ve had the best beignets (French-style doughnuts) around.  They’re really not very hard to make at home; check out our book, on page 197, and the chocolate-filled variation on page 199.  We make them at my house for Hannukah (tonight was the last night), and they are sublime (the same deep-fried treat is called soufganiyot in Hebrew).  The only special equipment you’ll need is a candy thermometer.

Start with a pound of dough, choosing challah (page 180), or brioche (page 189), which will make 5 or 6 beignets.  Roll out the dough into a 1/4-inch rectangle, then cut into 2-inch squares using a pizza wheel or a sharp knife.  Place a half-ounce of bittersweet chocolate into the center of each square.  Gather the edges of the dough around the filling, pinching at the center to form a seal; you may need to use a bit of water to help the edges stick together. 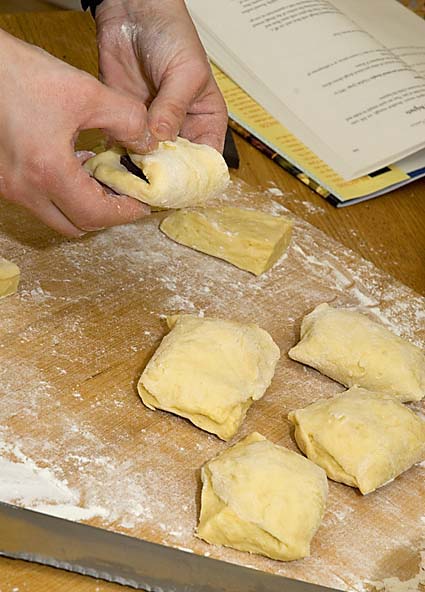 Allow to rest for 15 to 20 minutes while the oil heats up to 360 to 370 degrees F. for deep frying– clip a candy thermometer to the pot to be sure, don’t try to estimate.  You need lots of oil, 3 or 4 inches so the beignets can sink, and then float to the top.  Watch the temperature– it’s too cool, they’ll absorb too much oil; too hot and they’ll burn on the outside and be gummy on the inside.  360 to 370 is just right.

Carefully drop the beignets into the hot oil, giving them room to rise to the surface and get a nice rise; don’t crowd them.  It’s very handy to have someone help you with this crucial job; ask them to adjust the temperature if it falls below 360 once the beignets are added to the pot.  Laura’s so good at this that she can read the paper while making perfect beignets/soufganiyot (it’s not hard)! 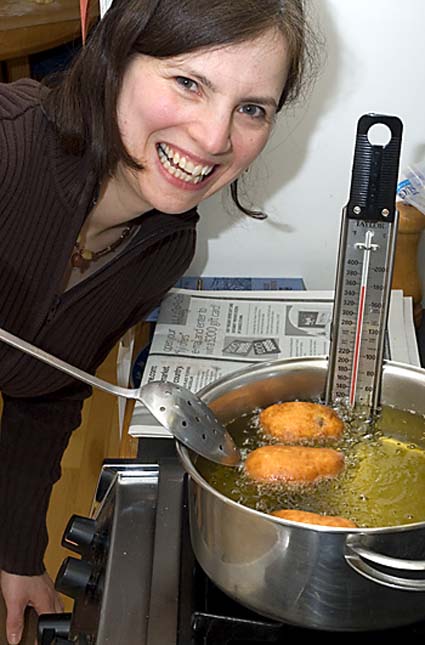 After 2 minutes, gently flip them with a slotted spoon and fry for another minute, or until golden brown on both sides.  Use the slotted spoon to remove beignets from the oil and drain on paper towels.  Repeat with remaining dough until all the beignets are fried.  Dust generously with powdered suger (shake it through a strainer), and eat while still warm! 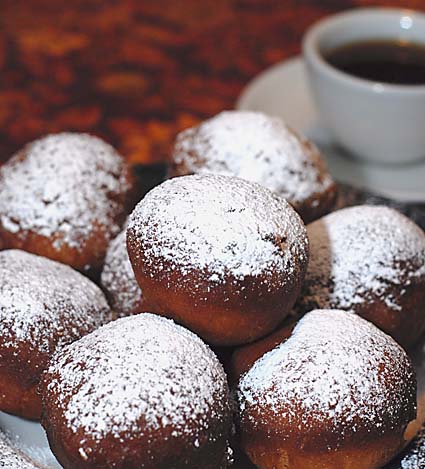 33 thoughts on “Chocolate-filled Beignets (or Soufganiyot, or whatever you’d like to call them)”