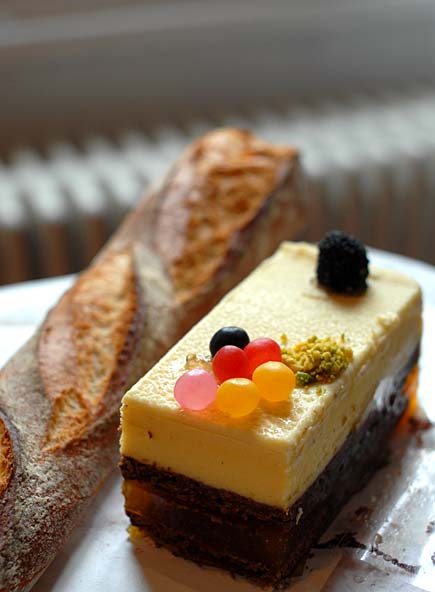 The pastry above is layered with chocolate pastry cream, flan, and on top, a very whimsical patisserie (pastry shop) in the Marais district in Paris has placed jelly beans, candy blackberries, and a little pile of minced pistachio.  For some reason, I seem to find the need to put a baguette in every picture.

My family and I’ve been home from France for a month but I’m still not exactly “home.”

More photos if you click below; plus new tips on getting a perfect Dutch oven bread on the outdoor gas grill (we’re going to keep refining this).  I’d planned on trying to re-create this pastry—-baking up brioche, slicing it thinly, and layering it with pastry cream (recipe for the cream in our 1st book on page 225, the brioche on page 189, book available on Amazon).  But as I said, I always seem to end up with bread… 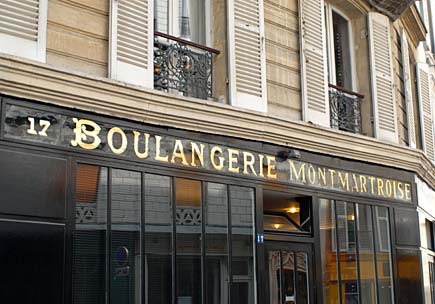 It seems like every Art Nouveau storefront has been converted into something else; this Paris boulangerie (bakery) has been turned into office space.  No matter, there are still plenty of incredible bakers.  Before we left Paris, we’d found some fantastic ones—-here’s a rustic apple tart and a millefeuille (Napoleon) from somewhere in the 2nd arrondissment (I should have paid more attention but then it would have been more like work than fun): 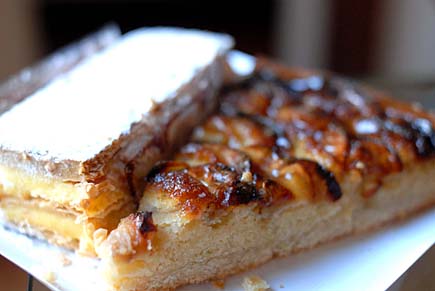 Jewish bakeries in Paris, especially in the Marais, bake up some fantastic challah too… 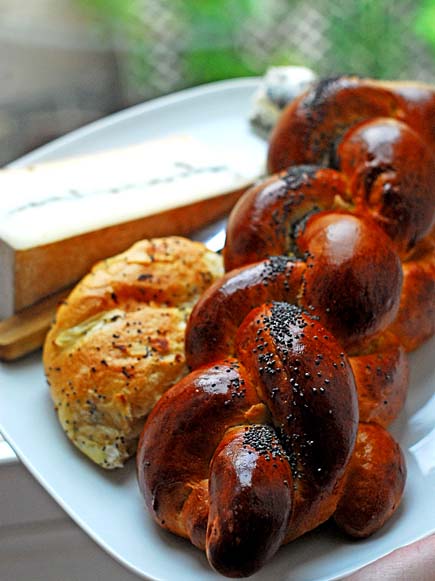 … and I hope it is lost on no one that this picture also captures a John Barrymore Pletzl, the savory onion flatbread from Eastern Europe (click here for our recipe).  I suppose the Parisians don’t call it that, and I continue to await Drew Barrymore’s response to my open question:  Why did my grandfather name this bread after your grandfather?

After a week in Paris we headed south, to a jewel box of a Renaissance-era hill town in the the Dordogne.  Beynac was heavenly, and our place was down the hill from Beynac Castle, where they shot the scene in Ever After, where Drew Barrymore, as the Cinderella character, confronts some evil miscreant (he backs down in the end because Drew turns out to be a stellar swordswoman): 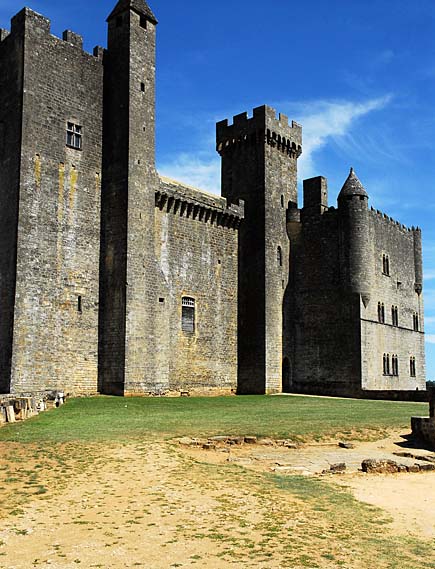 We ended up in Brittany, on the northwest coast, and other than a few baguettes I shot… 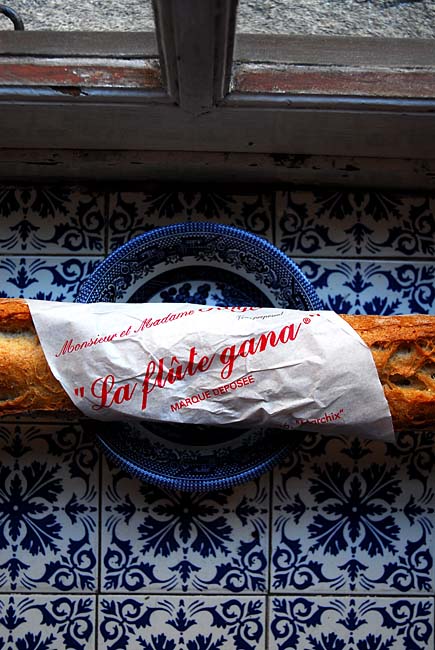 … we mainly just ate in Dinan rather than photographing.  We loved it no less than Paris or Beynac.  A high point was when the Tour de France actually passed by our front door.  It only takes 90 seconds for the pack to pass at the beginning of a stage, and I somehow managed to miss it (I was getting a beer– this is their World Series after all).  Here is the caravan of spare bicycles that trails the pack: 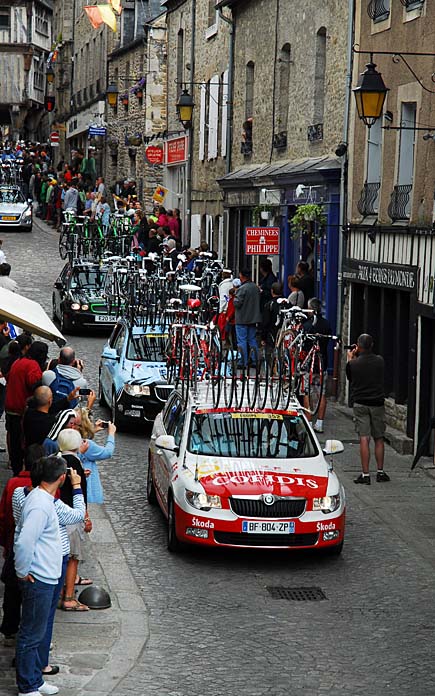 That was all I saw.  Really.

OK, on to more mundane matters– I discovered a slick way to prevent scorching of the bottom crust when you do a loaf bread in a Dutch oven on the outdoor gas grill.  General instructions are in the post referenced below, but we’ve always told people to wad up aluminum foil and put it into the bottom of the pan if they’re getting scorching of the bottom crust on the outdoor grill.  That tempered the grill’s direct heat from below and prevented scorching.  I found that I could achieve the same thing by placing the Dutch oven on top of a baking stone: 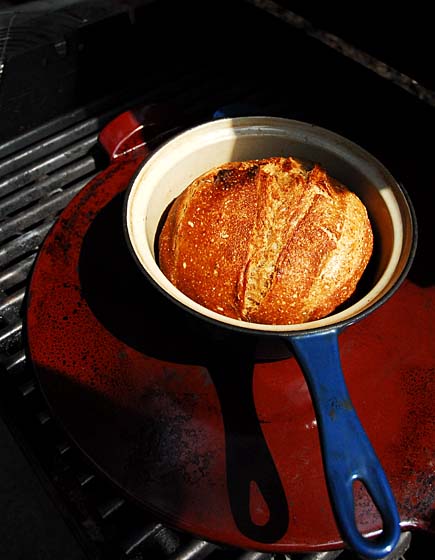 So if you like, skip the wadded-up aluminum foil, and as always, keep the pan covered for the first half to two-thirds of baking, then finish open (always with the grill lid closed).  I had trouble keeping my grill at 450F today, so I went with 350F and took a longer baking time (45 min), actually turning the loaf in the pan every ten minutes once it was opened (the bottom surface created this terrific browning, even at this low temp).  More on this method on our site, click here for a grill loaves in an iron pot, or click here for grill loaves in a clay cloche:

Have a great August!

23 thoughts on “(Thinking about trying to re-create) gorgeous pastries from France, plus, an even better way to do Dutch oven bread on the grill”