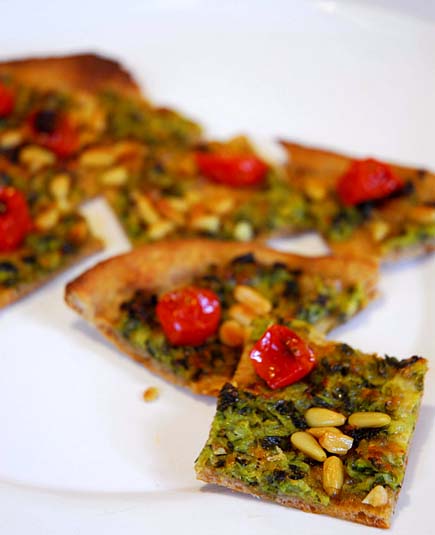 Sometimes you just don’t know when to leave well enough alone.  This savory flatbread was in Healthy Bread in Five Minutes a Day (2009), and I was making it tonight as a side dish for a simple baked Coho Salmon with dill.  I’m back on a pizza and flatbread kick again, since our new pizza and flatbread book is coming out in 28 days: 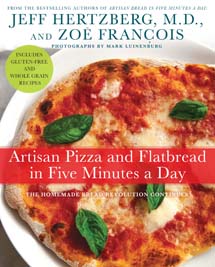 I wanted something to brighten up the flavor and color of all those soft lovely green things—roasted cherry tomatoes did the trick.  The tangy acidity was perfect for cutting the softer flavors of the zucchini, parsley, cheese, and nuts.  The tomatoes weren’t in the original recipe, and neither version has ever appeared on our website before, so here goes.  Plus, I’m going to be doing a demo this Saturday, October 1 at 10:15 am at the Minneapolis Bread Festival, and they’re asking for something like this.  Hope to see you at the festival, but if you can’t make it, give this a try here.  Our pizza book is available for pre-order on Amazon and will ship October 25.One of the hardest things about writing a cookbook is that you have to create food you like, and then freeze it in time.  Once the book is published, it’s exceedingly hard to convince the publisher to make changes and revisions because you are tired of making it the same way year after year.  And yet…  I look at this recipe two years later and think, “that would be nice with something sharp-tasting.”  So that’s what this website is for:

1/2 pound (orange-sized portion) of any of our un-enriched pre-mixed doughs, like plain white, or whole grain, or gluten-free

Broil the cherry tomatoes for 5 to 10 minutes, until just beginning to blacken in places and set aside.  Thirty minutes before baking time, preheat the oven to 450F, with a baking stone (ceramic or glazed, or cast iron all work well) placed in the bottom third of the oven.

Grate the zucchini on a box grater… 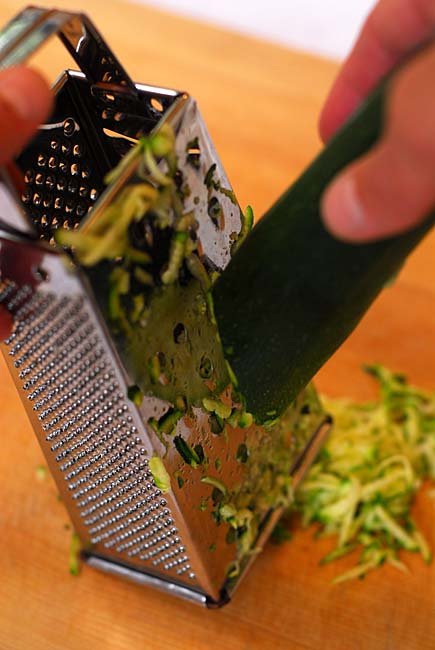 A coarser grater would work just as well, but my box grater produces a pretty fine result: 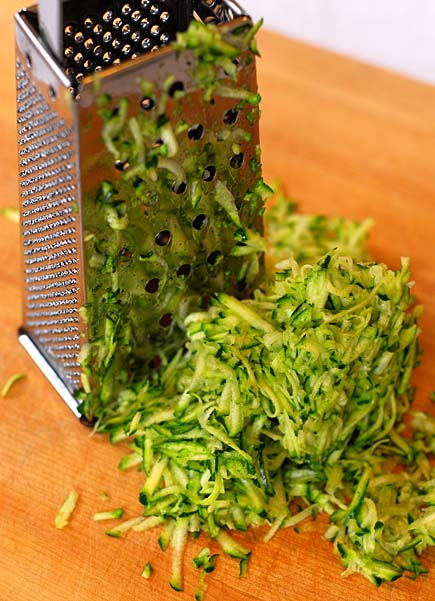 Cut the scallions into rings: 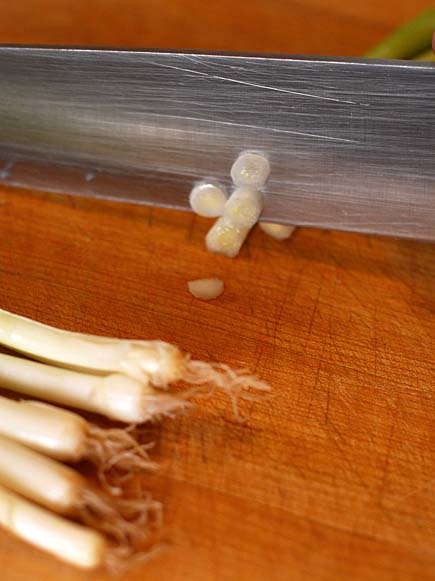 Heat the olive oil over medium heat in a skillet, and add the prepared vegetables. 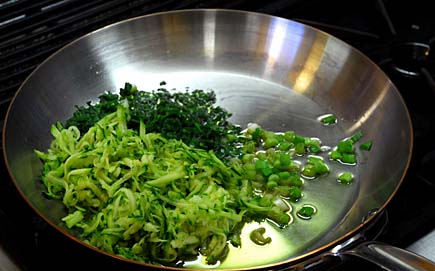 Saute until wilted and the liquid has mostly evaporated, about 10 minutes.  It’ll look about like this: 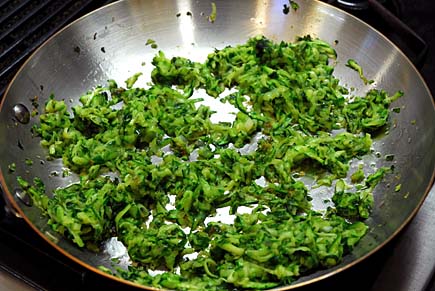 Cool slightly and stir in the grated cheese.  Season with salt and pepper.

Dust the surface of your refrigerated dough with flour and cut off a half-pound (orange-sized) piece.  Dust with more flour and quickly shape a ball by stretching the surface of the dough around to the bottom on all four sides, rotating a quarter-turn as you go.

Using plenty of flour, flatten the dough with your hands and a rolling pin… 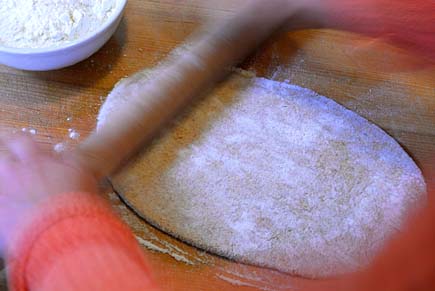 … to produce a 1/8-inch thick round (this will produce a 12-inch round flatbread).  Transfer to a pizza peel if you didn’t roll out on one in the first place.  Working quickly, scatter the surface of the dough with about a 1/4-inch thick layer of the sauteed vegetables.  Depending on the size of the dough round, you may have more than you need.  Sprinkle with raw pine nuts: 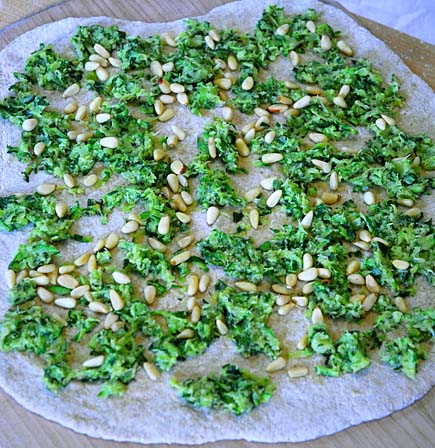 Slide onto the stone and bake for 12 to 15 minutes, turning pizza in the oven if it’s browning unevenly.  Remove from the oven when crust is nicely browned but before the nuts start to burn.  You can see why I don’t toast the pine nuts before using; they caramelize (brown) in the oven heat and if you jump-started that process they’d burn before the crust was done: 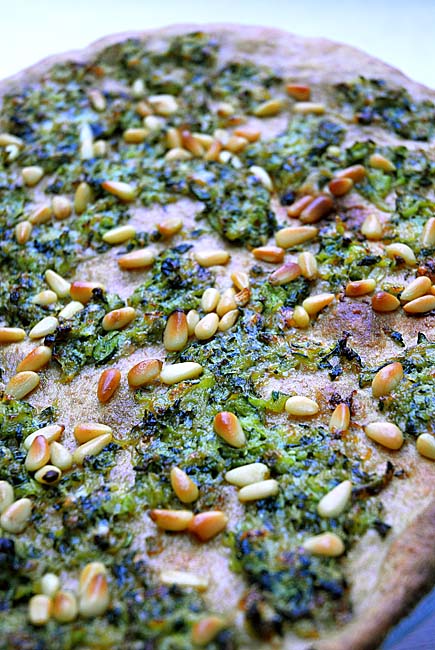 Immediately scatter the tomatoes over the flatbread, some cut-side up, and some cut-side down.  Use a pizza wheel or a chef’s knife to cut the pie into squares.  You can see what the tomatoes do for visual appeal, but their lively acidity also really changes the flavor.  In Artisan Pizza and Flatbread in Five Minutes a Day, we use halved tomatoes in a similar way, but without pre-roasting– in this recipe, I was concerned that all the oil, plus tomato juices might make for a soggy crust.  Pre-roasting drives off much of the water in the tomato: 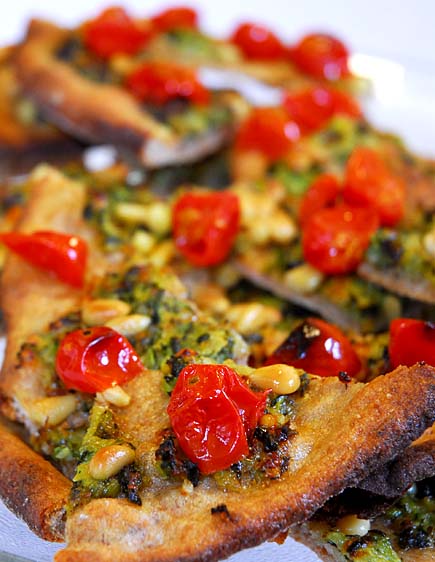 See you on Twitter or on Facebook, or at the Minneapolis Bread Festival this Saturday, October 1, at 10:15 am at the presentation kitchen in the Mill City Farmer’s Market.