This was lunch today.  If you want to get more vegetables into your diet (or sneak it into someone else’s), pizza is the way to do it.  Nobody ever turns down homemade pizza.  Here’s a vegetable pizza with lots of arugula baked right in, so this is different from what we did with arugula in the book (using it raw as soon as the pizza comes out of the oven)…… and you can really load it up with vegetables.

First off, preheat your oven to its highest setting (usually either 500F or 550F) with a pizza stone near the bottom of the oven.

First rule of successful pizza-making is to prep all your ingredients in advance.  Biggest risk if you don’t:  the pizza may stick to the pizza peel when you slide it onto the pizza stone, because you’ve wasted time prepping after the dough is sitting on the peel.  Here I’ve prepped a half-cup of ricotta cheese, a good handful of arugula, about 5 cherry tomatoes (halved), and about a quarter-cup of diced roasted eggplant: 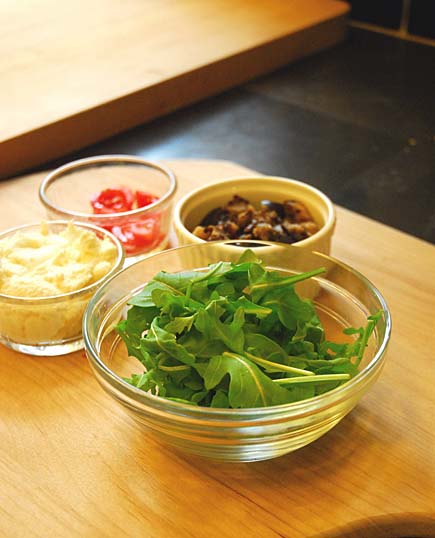 Take a 1/2-pound ball of lean dough (“lean” means made without large amounts of eggs, fat, or sweetener) and stretch it into a 12-inch circle, 1/8-inch thick (see our Basics post or Artisan Pizza and Flatbread in Five Minutes a Day for details).

Apply about a half-cup of ricotta cheese (part-skim is fine, but whole-milk is richer tasting); you don’t have to apply it evenly, just blob it on: 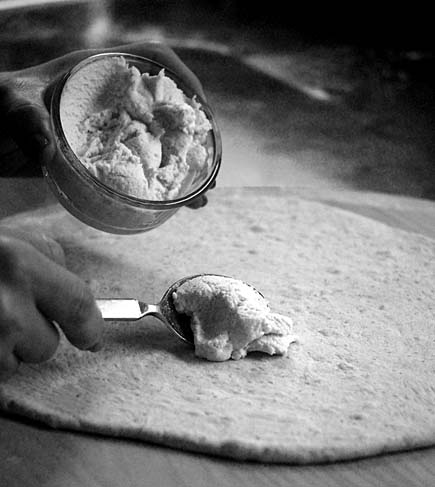 Put on the arugula, then the eggplant and tomatoes, finishing with two final touches:  a drizzle of olive oil, and a couple of teaspoons of cilantro chutney (nothing more than a bunch of cilantro food-processed with two teaspoons of sugar, a teaspoon of sesame seeds, and enough white vinegar to blend it into a smooth sauce). 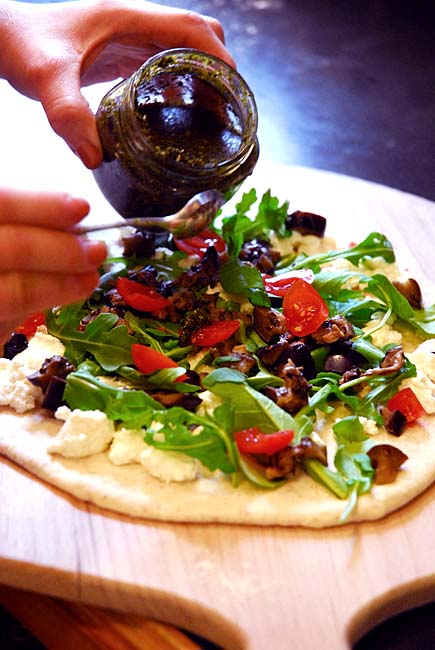 Shake the pizza peel around before you try to slide it onto the stone.  If you see that the pizza is partially stuck on the peel, sprinkle flour next to the stuck side and dislodge it by slipping a dough scraper under it like so: 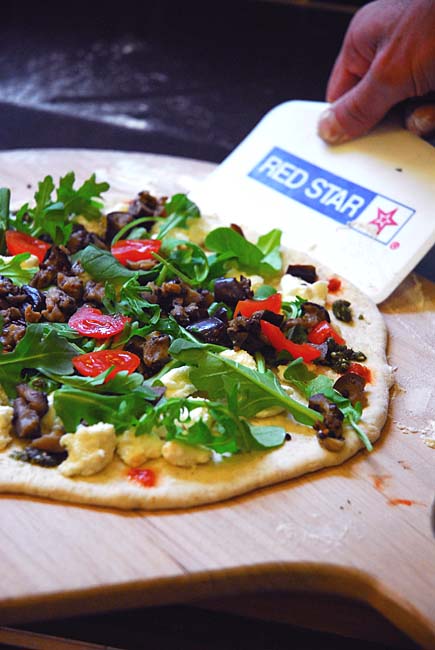 It may look like a salad now, but it won’t when it’s baked!  Slide it off onto the hot stone and you’re less than 10 minutes away from… 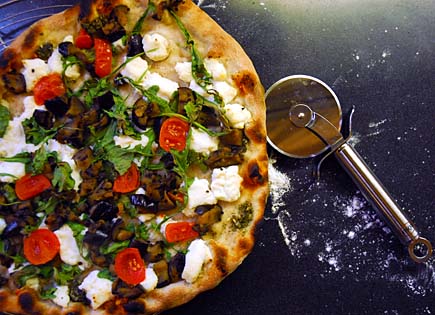 Other veggie options in Artisan Pizza and Flatbread in Five Minutes a Day:

9 thoughts on “Pizza with ricotta, arugula, eggplant, and tomato. Lots and lots of vegetables.”