(photo by Mark Luinenburg) It has been suggested to me that the real reason I like to throw pizza dough into the air when I teach a class is not because throwing the dough improves the pizza, but because I am an incorrigible show-off.  I will neither confirm nor deny this beastly rumor.  But having now thrown a lot of dough, I truly can say how beautifully it thins the dough and relaxes the gluten.  There’s more on this in Artisan Pizza and Flatbread in Five Minutes a Day, but here are some photos a video that show how it’s done.  The toss does scatter a bit of fine flour into the far reaches of your kitchen, but even so, I usually do it when I make pizza at home.  If I’m outside making grill pizza, I always throw the dough — there’s no ceiling, and you don’t have to clean up (the latter is a dream come true for me).

The keys to getting a good toss (video link’s at the end of this post):

1.  Form a nice cohesive ball using the gluten-cloaking method we talk about in the books, and sealing up the ragged loose ends on the underside of the ball.  I do that in the video but there’s one other trick that doesn’t appear in the video:  if you have time, let the ball sit for 20 to 40 minutes, covered with plastic wrap or an overturned bowl.  It will be much easier to stretch when it’s warmed a bit.

2.  Balance the disk on the backs of your hands– the knuckles.  Use them to stretch the dough a little more before you throw:

Throw your hands upward and spin them around each other, extending your dominant hand’s forefinger and middle finger a little at liftoff (very challenging to capture this on film or video): 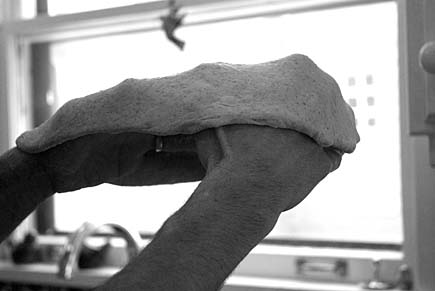 Buon appetito!  There’s a much more video about pizza and all things bread on our YouTube channel (YouTube.com/BreadIn5).

38 thoughts on “How to Throw Pizza Dough: New Video”