This week I had the tremendous pleasure of doing an event with the Minnesota Food Bloggers. The group is held together with the love and sweat of Stephanie Meyer and includes 450 passionate food lovers. The group gets together about once a month to celebrate what is exciting and new in the Minneapolis food scene, which is growing larger and more exciting every day. Stephanie invited me to do a pizza class for the group, and I jumped at the chance. An excuse to hang out with this group and an opportunity to get them all tossing dough in the air and baking pizza. The venue was also a tremendous draw for me, we did this giant pizza party at the Kitchen in the Market. A fully equipped professional kitchen run by the sweet, sassy and talented duo Molly McDonald Herrmann and Tracy Morgan. Here is a lovely post of the party by Sarah Kieffer whose site  The Vanilla Bean Blog is just beautiful.

We made dough from Artisan Pizza and Flatbread in Five Minutes a Day the kind made specifically for tossing high in the air. The dough for tossing is made with Bread Flour, so it is a bit stronger and can handle being thrown as high as you dare. The group has several folks who are on a gluten free diet, so we had our gluten free crust available to them. The g-f crust is tasty and makes a brilliant pizza, but can’t be tossed high in the air and needs to be handled in a different way from traditional dough.  Below are our instructions for the no-fail gluten free crust. But, before I roll out the dough, I want to say a little about the toppings. There are some gifts that are priceless…so rare, so precious and so fleeting that they make you want to weep. Kathy Yerich, one of the partners of Rouge Pottery, brought me such a gift at the pizza party. She went foraging for morel mushrooms, ramps (spring onions) and nettles and brought them to me in a basket. The contents of this basket were almost too gorgeous to eat, but I managed and made this pizza, which my husband said “tastes like summer!” What a gift.

To work with gluten free pizza dough from Artisan Pizza in 5:

Preheat the oven as high as it will go (most ovens will get to 500° or 550°F), with a pizza stone placed on the bottom rack. 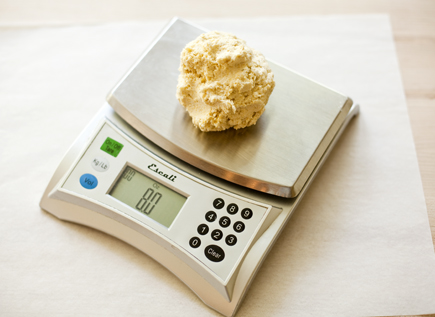 Start with a small ball of dough, about 8 ounces or the size of a peach. Remember this dough doesn’t stretch, so just pull out a piece and form it into a ball. 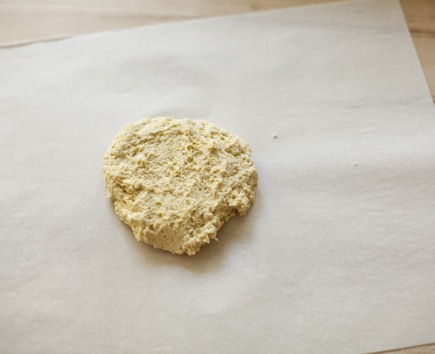 Place the ball on a sheet of parchment. (There are instructions in the book for doing this directly on the pizza peel, but this method gives you insurance that the dough won’t stick.) 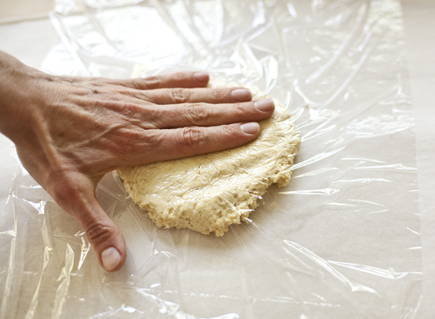 Cover with a piece of plastic wrap and pat it out to the shape you want, don’t feel constrained to round. 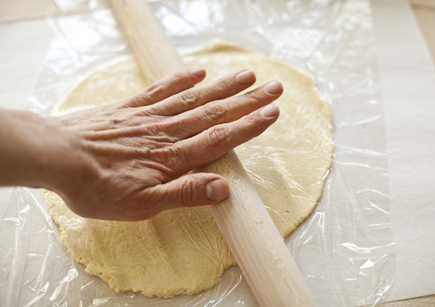 Use a Rolling Pin to get the dough about 1/16-inch thick. 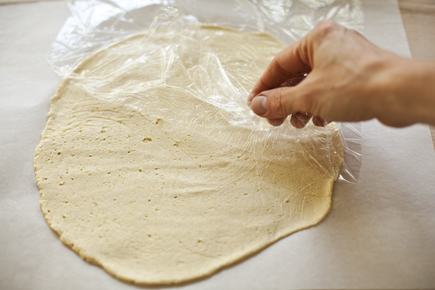 Peel off the plastic. 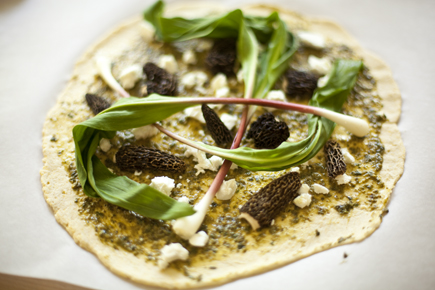 Top your dough with your favorite toppings. I used pesto from our book, goat cheese, ramps, morels, asiago cheese, and pine nuts. 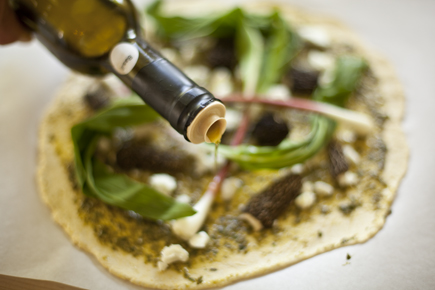 A drizzle of olive oil. 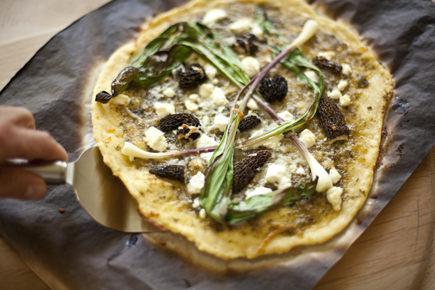 Bake the pizza for about 5 to 8 minutes on a preheated Pizza Stone, until the crust is set, but not quite finished. Remove the pizza from the parchment. 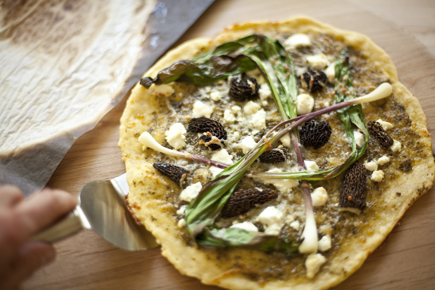 Place the pizza back in the oven, directly onto the hot stone, to crisp up the bottom crust. Bake for an additional 2 to 5 minutes. 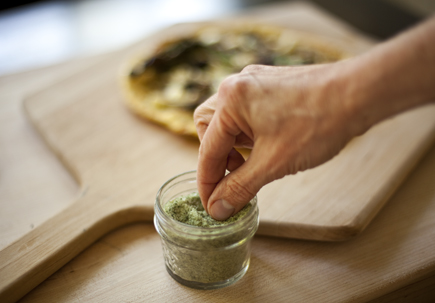 I sprinkled a pinch of the nettle salt that Kathy gave me, but sea salt of kosher will do it to. 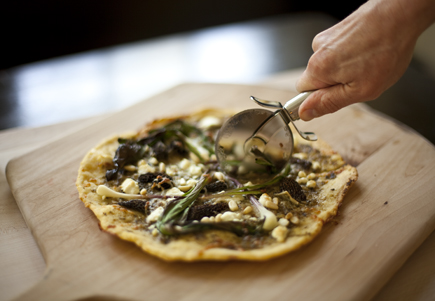 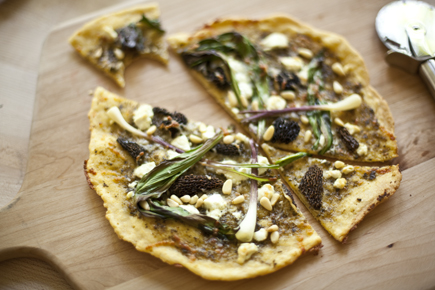 It took a village to throw a kickin’ pizza party for the MN Food Bloggers and I would like to thank all of the local and national companies who made generous donations: