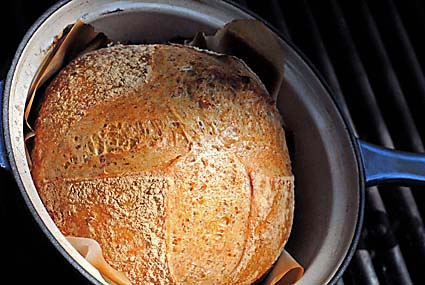 Below, one of my posts from years back, on baking loaf breads on the gas grill in my backyard.  Some folks were having trouble with the bottom scorching and one solution is to crumple a bunch of aluminum foil and put it under the loaf so it insulates under the parchment.  And here, click on the video for a TV appearance where I had a chance to show how to handle the dough for flatbreads on the grill (didn’t actually go outside).

Baguette on the grill

Pumpernickel done on the grill

Brioche on a grill

Bread on a Coleman stove while camping

Fruit pizza on the grill baked with the stone

Pumpernickel done on the grill

Even in Minnesota it’s 83 degrees today, so out to the gas grill I went.  Last summer, we did pizzas, and other breads on the gas grill (I like the Weber gas grills for this), but I never tried baking on a gas grill with a closed cast iron pot.  The results are terrific– the crust is much better than last summer’s projects because the Dutch Oven traps steam next to the bread–you don’t have to add any other steam to the baking environment.  But you also need to use a pizza stone under the pot, or it can scorch.  Preheat a thermometer-equipped gas grill, with a baking stone and a covered 1-quart Dutch oven in place, to about 450 degrees F (close the grill lid).  Amazon only seems to carry a two-quart Creuset at the moment.  If your Dutch Oven’s lid doesn’t have a non-plastic handle like mine, you’ll need to replace the plastic handle with a steel replacement knob as described in an earlier post on indoor Dutch Oven baking.   It takes some fiddling with the temperature control to get the gas grill to a constant temperature. 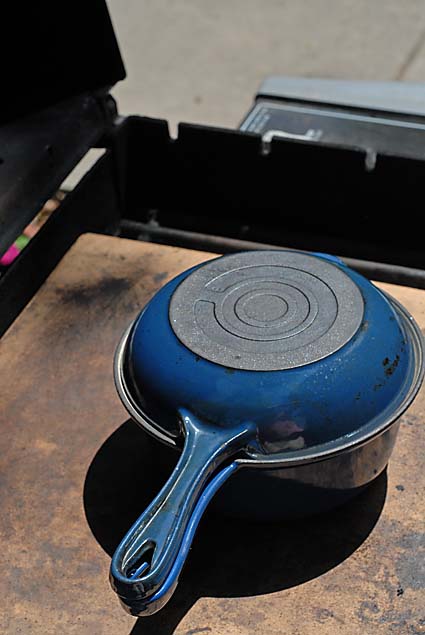 Meanwhile, I used a kitchen scale to weigh out one pound of any lean dough of your choice, which is the perfect size for the one-quart Dutch Ovens– the tight fit keeps wet dough from spreading.  If you overfill them, the top pops off, defeating the steam-trapping that’s essential for success here.  If you have the two-quart Dutch Oven, you need two pounds of dough (you can make a small loaf in a large pot but you won’t get the “containment” effect which counters the tendency to spread).  If you don’t have a scale, just estimate one pound by pulling out a grapefruit-sized piece of dough from your stored, refrigerated batch (the basic white flour recipe is here). 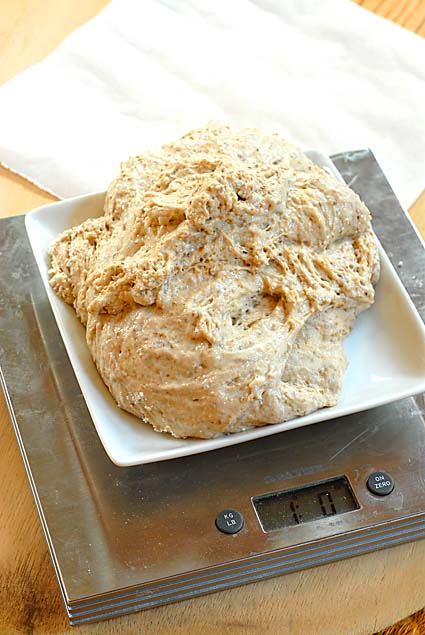 Shape the dough into a ball, using flour and your fingers (the “Gluten Cloak” method)—see our videos if you haven’t done it before.  Put the ball on some parchment paper and cover loosely with plastic wrap; you don’t have put it out by the ferns.  Rest it for about an hour. 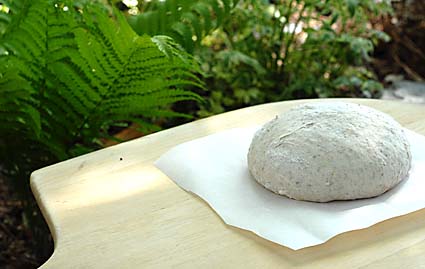 Slash at least a quarter-inch deep with a bread knife: 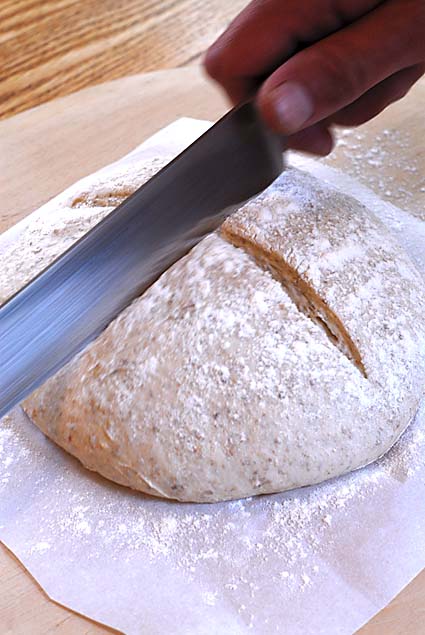 Carefully drop the ball, parchment-side down, into the preheated Dutch Oven. 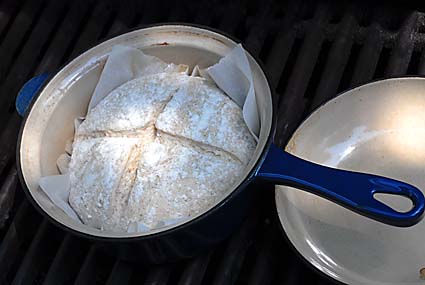 Using a pot-holder or oven mitts, cover the Dutch Oven.

Bake for about 30 minutes; for the second half of baking, remove the cover of the Dutch Oven and re-close the lid of the grill; this will crisp the glossy and caramelized crust that you see when you remove the lid.