Make bread in five minutes a day. Join the revolution!

Zoe and I were heard today on National Public Radio’s The Splendid Table, where we were interviewed by Lynne Rossetto Kasper. We got a chance to tell a national audience how our method works, and why stored dough is so extraordinarily different from traditional methods. There were terrific radio sound effects, like the pain d’epi (wheat-stalk bread) we’d brought, crackling obediently for Lynne’s microphone (Mark Luinenburg’s gorgeous picture of an epi is above). It was great fun to make contact with the show and the radio personality who helped launch our book. Seven years ago, I’d called in to the same show to ask how amateurs can get a cookbook published. An editor was listening, asked for a proposal, and voila! Zoe and I did the proposal (eventually), wrote the book (eventually), and now it’s in its third printing (eventually!) Click here to listen to the show… we’re about 13 minutes into the broadcast.

Zoe and I were interviewed last month by Rick Nelson, food writer at the Minneapolis Star Tribune, and the article came out on December 6, 2007. Rick was more than kind to us: “…If holiday gift-givers are aiming to buy one new cookbook title for the bakers in their lives, they should look no further than the remarkable Artisan Bread in Five Minutes a Day… Hertzberg and Francois should have called their burst of genius Breadmaking for Dummies — that’s how user-friendly it is… their master recipe is wildly flexible, generously adapting to a wide range of breads, pizzas, flatbreads and pastries.” Read the entire review.

We’re just as excited about Jenni Pinkley’s fantastic video that she shot for the paper’s website. Astute and attentive viewers will note Zoe’s incisive comment as the video closes. Click here to see the video. Speaking of video, I think Martha Stewart was talking about us when she interviewed legendary cookbook editor Judith Jones on The Martha Stewart Show that aired last week. Martha asked Judith (who edited Julia Child and James Beard) “what do you think of this wet bread that you hardly let rise, you hardly do anything to it, you just sort of put it in the oven?” Judith wasn’t buying; she told Martha that “kneading is the fun of making bread.” Martha asked her “I know, but what if you don’t have to?”

Couldn’t have said it better ourselves. See the video (click on the “video” tab once you get there; Martha brings up bread at 2:15 into the video).

A frequently asked question is…”How do I get that sour characteristic of artisan bread without having to use a starter, which is way too high maintenance?”

The answer is easy with our bread method, just wait. I mean mix up your dough, let it rise, use some if you need to immediately and then let the rest of the batch sit in the refrigerator for up to two weeks. Don’t feed it, just wait. After the 2nd day you will notice that the flavor is more complex and is starting to take on the characteristics in artisan bread that you crave: sourdough flavor, larger air holes, nice “custard” crumb and crisp tin crust. As it ages it improves, like all of us! The way I maintain that flavor in the next batch is to leave a piece from an “old” dough in the bucket and just dump the ingredients for a fresh batch right on top. END_OF_DOCUMENT_TOKEN_TO_BE_REPLACED

People have asked whether our recipes can be made in convection ovens. They can, and the only reason we didn’t mention convection ovens in our first book is that most people don’t have them.

But convection ovens do a great job with bread– the bread browns easier and rises higher when the convection fan is blowing. After ten years of living with a broken convection fan, we finally had a mechanic look at it who knew how to fix it. So I’ve been re-testing everything with convection.  First, lower the heat by 25 degrees F. Make sure that the convection fan isn’t fooling your thermostat (use an oven thermometer).

For a loaf-pan bread made from Italian Peasant Bread dough (page 46 of ABin5), the loaf baked faster than usual (about 25 to 30 minutes), rose higher, browned more deeply, and was more attractive. The pan was placed directly on the stone near the center of the oven and baked with steam (page 30). The loaf was heavenly when cooled and cut. Perfect custard crumb (dough was a week old) and richly carmelized crust.

In many convection ovens, you will need to be more attentive to turning the loaf around, at least once at the midpoint of baking or beyond. Otherwise you’ll get uneven browning.

But be aware that many newer convection ovens automatically make an adjustment, so consult the owners manual that came with your oven before deciding what to do about the set temperature.

More in The New Artisan Bread in Five Minutes a Day, and our other books.

Here’s my question: I went through a sourdough phase awhile back and got used to measuring flour with a scale. I’m excited about trying it again with your dough formulas. Is there an equivalent you’d suggest for weighing flour(s)? Different books seem to vary in what they consider the weight equivalent of a cup of flour. I’d appreciate any suggestions and again, thanks so much.

“Soon the bread will be making itself….The crusty, full-flavored loaf that results may be the world’s easiest yeast bread.”

The Associated Press also covered us in an article that ran all over the U.S: 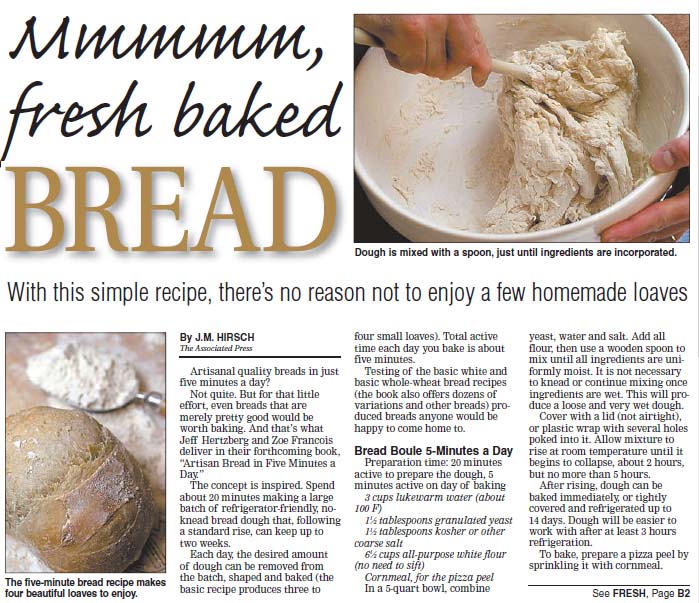 It is nearly Thanksgiving and there are pumpkins in everyone’s shopping cart, generally in a can. If you want a real treat, that is easy and will have you wanting to skip the canned isle in the grocery store, try roasting your own pumpkin. Baking the pumpkin caramelizes the sugars and makes for a sweeter puree than boiling. You’ll want to start with a “pie” or “sugar” variety and avoid the BIG Jack-o-Lantern pumpkins which are great for carving but are too watery to eat their flesh. Once you have roasted your pumpkin you can use 1 cup for Oatmeal Pumpkin Bread on p. 100 of Artisan Bread in Five Minutes a Day, the rest is for your favorite pie recipe. END_OF_DOCUMENT_TOKEN_TO_BE_REPLACED

Yesterday we had our first book signing at the Borders in Rosedale Center. We met what seemed like hundreds of enthusiastic bakers and bakers-to-be, all coming by to sample our Italian peasant loaves. Everyone that stopped had a story of their own bread baking or wanted to share their grandmother’s recipe. We sold and signed the entire stock of books in just a couple of hours. It was fantastic! END_OF_DOCUMENT_TOKEN_TO_BE_REPLACED

When Jeff and I started to write Artisan Bread in Five Minutes a Day I sent the “master” recipe to my mom. It was, in my mind the ultimate test. Not because my mom has been baking for years and would be hyper critical, quite the opposite. You see my mother has many, many talents, but baking is not one of them. Or I should say it wasn’t until now. I sent her the recipe and waited. A couple of days later I got a hysterical call from her and she was slathering butter all over her first loaf of bread. She had just taken it out of the oven and despite our recommendation to let it cool she cut into it when it was still warm. She was talking to me between bites and was so proud of herself. END_OF_DOCUMENT_TOKEN_TO_BE_REPLACED

This week Jeff and I were on the KARE 11 Saturday morning show with Belinda Jensen to promote our book and mix up our dough in front of her viewers. I admit I was a bit nervous, more than a bit, but Belinda made us feel like we were just chatting in her living room. Everyone at the studio was so kind and after our 5 minute TV debut they swarmed around the table of bread and devoured everything we brought. They have our “Master” recipe on their website. Eric Perkins was there as well and he grabbed a “sticky pecan caramel roll” between every segment. END_OF_DOCUMENT_TOKEN_TO_BE_REPLACED