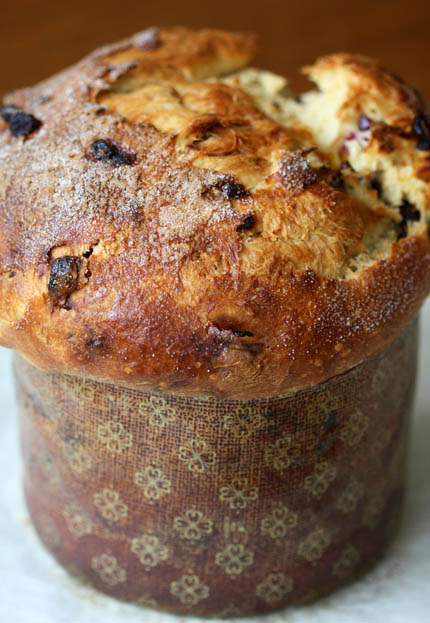 Panettone was traditionally a Christmas bread sold all over Italy during the holidays. It finds its origins in Milan around the 15th century, and has been the subject of much romantic lore.  The most often told story of how this bejeweled bread came to be goes something like this.  A young nobleman by the name of Ughetto Atellani fell in love with the daughter of a poor baker named Toni.  In order to impress her, Ughetto disguised himself as a pastry chef’s apprentice in her father’s bakery. He creates a tall fruit studded bread to present to her father, calling it “Pan de Toni.”  The bread, rich with eggs and butter, sweet with honey, scented with vanilla and lemon zest, with the finishing touch of dried and candied fruits was a success in the bakery and wins the admiration of the lady and the father’s respect. The baker blesses the marriage and Ughetto marries the daughter.
The story is rich and fanciful, just like the bread.  Today this sweet loaf is no longer saved just for Christmas, it is eaten at other holidays throughout the year and served sliced and toasted for brunch and as a dessert with a selection of cheeses and sweet wines. The bread, despite its rather lighthearted lore is quite sophisticated. The traditional method for making panettone is done over the course of several days. It included long sessions of kneading and allowed for up to 20 hours of rise time in order to create a flavor that is both sweet, but also has a complexity caused by the fermentation of the dough. Today, we want the same balance of flavor, without having to labor over the process or wait several days to enjoy our bread. Although you can bake the bread after only a couple of hours of refrigeration we recommend letting it sit for about 24 hours to develop its full flavor.
There are traditional Panettone molds that are very high sided which come either straight or fluted, they give the bread its characteristic cupola shape.  These molds can be found in either metal Panettone-Charlotte or Paper Moulds varieties at cooking stores or on the web.  We have also used a Brioche Molds

, and many people bake them in large, empty, parchment lined coffee cans to achieve the high domed loaf. END_OF_DOCUMENT_TOKEN_TO_BE_REPLACED