It’s basically summer, even here in Minnesota, and I’m baking loaves outside on the grill already.  Last summer, we did a lot of grilled flatbreads (and there’ll be more to come), but a few days ago I baked a peasant loaf in a closed cast iron pot, right on the gas grill.  We’ve had lots to say about baking in a closed vessel, which works great indoors.  Well, it works great outdoors too.  Use any lean dough you like; try our regular white recipe, from Artisan Bread in Five Minutes a Day, or the whole-grain version, from Healthy Bread in Five Minutes a Day.  After you view the video, come see the finished product (picture at the end of this post).

In the video above, I’m not entirely clear on baking times.  You bake with the lid on the pot for the first two-thirds of baking, then remove it so the top crust can complete its browning for the last third of baking.  If the loaf takes 30 minutes, then the first 20 are covered.  Play with your grill to get the temperature stabilized around the level called for in our recipe (you need a grill with a thermometer), but be aware that you may need a lower temp than what’s called for– in some gas grills the bottom will scorch at full temp.

If you don’t have a cast-iron pot, you can use any oven-proof lidded vessel, including a cloche, but simple inexpensive things work as well.  For cast-iron, you can use an enameled pot as in this post, or simple un-enameled black cast-iron.

If you do go for the Le Creuset enameled cast-iron pans (here’s a two-quart version on Amazon), they’re terrific, but you might need to replace the standard composite lid-knob with this metal one for high-heat baking, on the grill or otherwise.  The composite degrades at temperatures above 375F or so, though some seem to say otherwise in the product literature.  Check with the company if you’re in doubt.

But here’s what the final result looks like (yes I’ve switched pots on you here, this is from a different baking session–the slashing on this loaf was parallel cuts rather than the cross I did in the video): 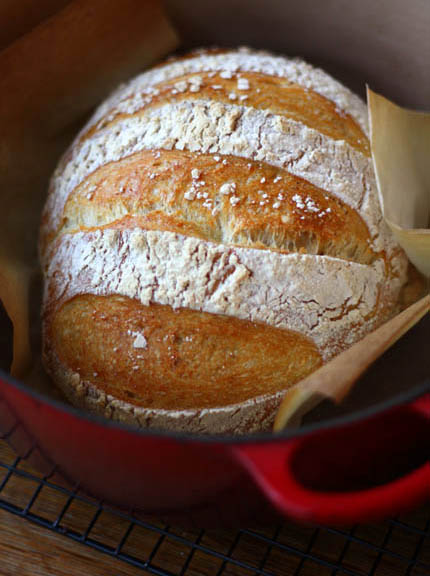 Stay in touch with us on: