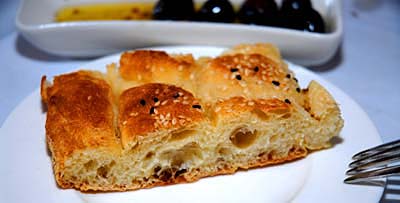 New York’s a great bread town; its best bakeries are really world class.  But if you start sampling restaurants not neccesarily known for their bread, it gets kind of variable. It’s a real disappointment to sit down to a week of great restaurant meals in one of the world’s great food cities, and find that only one of them is accompanied by good bread (pictured above; a Turkish pita with black and white sesame seeds at Zeytin Turkish Restaurant and Bar, on the Upper West Side). Zeytin’s pita, done by a bakery service, has been a bread high point of a nine-day stay in the Big Apple.

But at a fantastic little French-Algerian place, the baguette was comically dismal– it actually CRUMBLED when pressed in the hand (don’t ask about the mouth). This restaurant takes itself very seriously (the terrific and authentic couscous was $38 a plate). Why the gap between food and bread? We all need to complain more (like New Yorkers, which is exactly what our hosts did the next night, when faced with overtly stale Italian peasant bread at their reliable Midtown trattoria where they are well-known to the staff). Alas, there was no fresh bread in the restaurant at 10:30 on a Wednesday.

So for great restaurants with lousy bread, I’m proposing B.Y.O.Bread rules. Make your own and bring the stuff. It will raise eyebrows and consciousness. Meanwhile, here’s a pita recipe that WON’T puff, in the style of Greece or Turkey.

Turkish and Greek pita differ from the usual Middle Eastern version in that it has butter, and, there’s no puffed pocket. I’m adding the butter just before baking, rather than in the dough mix (for versatility’s sake). It’s also crisper, so add in the steam bath for more browning and crunch. To avoid puffing, roll it a little thicker, slash the surface, and bake at a lower temperature. —Jeff

1. Twenty minutes before baking, preheat the oven to 450 degrees F with a baking stone near the middle of the oven. Place a broiler tray on any other shelf that won’t interfere with the bread.

2. Just before baking, dust the surface of the refrigerated dough with flour and cut off a 1-pound (grapefruit-size) piece. Dust the piece with more flour and quickly shape it into a ball by stretching the surface of the dough around to the bottom on all four sides, rotating the ball a quarter-turn as you go. Place the ball on a flour-dusted pizza peel.

3. Using your hands and a rolling pin, roll the dough out into a round with a uniform thickness of 1/4-inch. Sprinkle with more flour as needed to prevent sticking.

5. Slide the loaf directly onto the hot stone. Pour 1 cup of hot tap water into the broiler tray, and quickly close the oven door. Bake for about 15 to 20 minutes, until golden brown.

6. Serve warm or at room temperature with Greek or Turkish dips or appetizers, like taramasalata.

28 thoughts on “I love New York: in search of great bread”