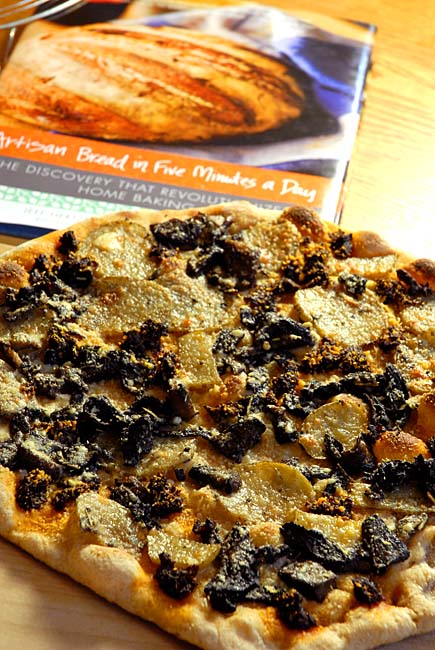 Well, we do have a pizza book coming out in October, so we can’t start putting those recipes up on the site.  But here’s one of my favorite from Artisan Bread in Five Minutes a Day, our first book (2007).  It’s never been on the web before, and it’s a gem of Mediterranean simplicity.  In the next several days, I’m going to put up a video of the gas-grill version of this bread, so check back– for now, here’s the oven version (though you can probably figure out  how to do this from our old grill-pizza posts—https://artisanbreadinfive.com/?p=846

As you can see, if you choose portobello mushrooms, they’re dark, dark brown in the first place and as they caramelize in the skillet and on the pizza, they become almost black.  Don’t be alarmed– they aren’t burned.  They’re just developing intense flavor as the dehydrate a bit.

OK, here’s what you need:

1/2 to 1 pound lean refrigerated dough, white or whole grain, or other from our books

Salt and pepper to taste

Flour or cornmeal for covering the pizza peel

Preheat a baking stone in the oven for 20 to 30 min to 550 degrees F.  Prepare and measure all toppings in advance.

Saute the potatoes and mushrooms in olive oil until potatoes are soft.  Season with the herbes de Provence, salt, and pepper.

Dust the surface of of the dough with flour and cut off an orange to grapefruit-sized piece, depending on how large a pie you want.  Shape into a ball and roll out on a pizza peel to 1/8-inch thickness (my favorite pizza peel is back in stock at Amazon).

Distribute potatoes, mushrooms, and sun-dried tomatoes over the surface of the dough.  Sprinkle the cheese over the top.

Slide the pizza directly onto the stone and bake for 8 to 10 minutes.  Allow to cool slightly before serving.