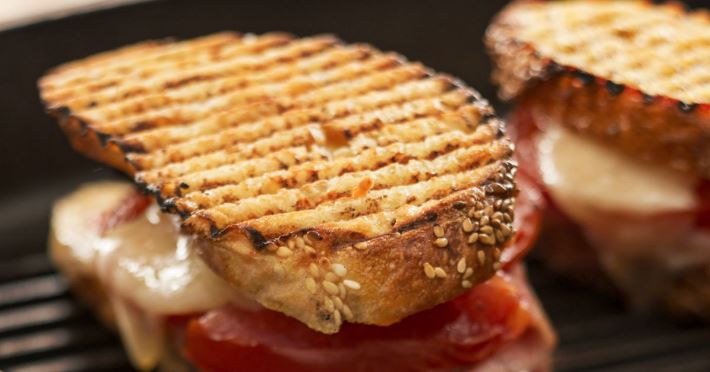 About unorthodox Holiday traditions (for me, Hannukah)–how about panini? Any time of year is the right time of year for one. We’ve done two grilled sandwich posts here on the website. Now, our official panini post isn’t quite right for Hannukah (there’s ham in it, but you can leave it out, of course). Our other grilled sandwich post is more American style than Italian–also fantastic.

What’s your favorite non-traditional recipe to whip up during the holiday season?

My family is Jewish, and many Hanukkah foods are fried things–commemorating the ancient Jerusalem temple lamp that miraculously stayed lit for eight nights when there was only enough oil for one. So for us, fried potato pancakes (latkes) are traditional. But then, my wife and I have added some odd ones to the mix, partly because she was a college coop baker, and partly because I became an obsessive baker (once she taught me how to do it). These days, when my daughter comes home from college, she’s craving the perfect peasant bread that they just don’t have at her college cafeteria—the bread we’ve been baking at our house since she was a little kid. It gotten even more extreme this year, because she’s in South America studying for a semester. Apparently, they just don’t have a very diverse cheese tradition in Ecuador, so she’s craving perfect grilled cheese made with a terrific sheep cheese we get (manchego)—on that bread. In December, when she’s back, we may crank out some latkes, but the fried Holiday food we’re making will be panini—grilled cheese sandwiches done the Italian way, on a press, in olive oil. That’s the perfect fried food for this particular Hanukkah.

Why is it your favorite?

It has everything going for it—great bread, great cheese, and olive oil!

How did you learn about this recipe?

The bread is from my first book, now in its second edition—The New Artisan Bread in Five Minutes a Day (2013). It’s the European Peasant Bread on page 94.

When was the first time you made this recipe?

I started making a version of this bread when I was a medical resident—in 1987.

Do you make this dish each year?

The bread is a long-time favorite in my house, and the panini, less consistently. It’s going to be our new Hanukkah tradition.

What does this recipe entail (including ingredients, time, equipment, etc)?

For the bread, with our method you mix and store a large batch of dough for up to two weeks, then cut off 1-pound chunks to bake as often as you like during that time. Flour, water, salt, yeast—that’s it. High moisture is what makes the storage possible.

Do you have any specific accounts or fond memories tied to this recipe?

My kids ate a version of this bread in their lunch sandwiches pretty much every day when they were growing up.